The fascinating history of chicken and waffles. 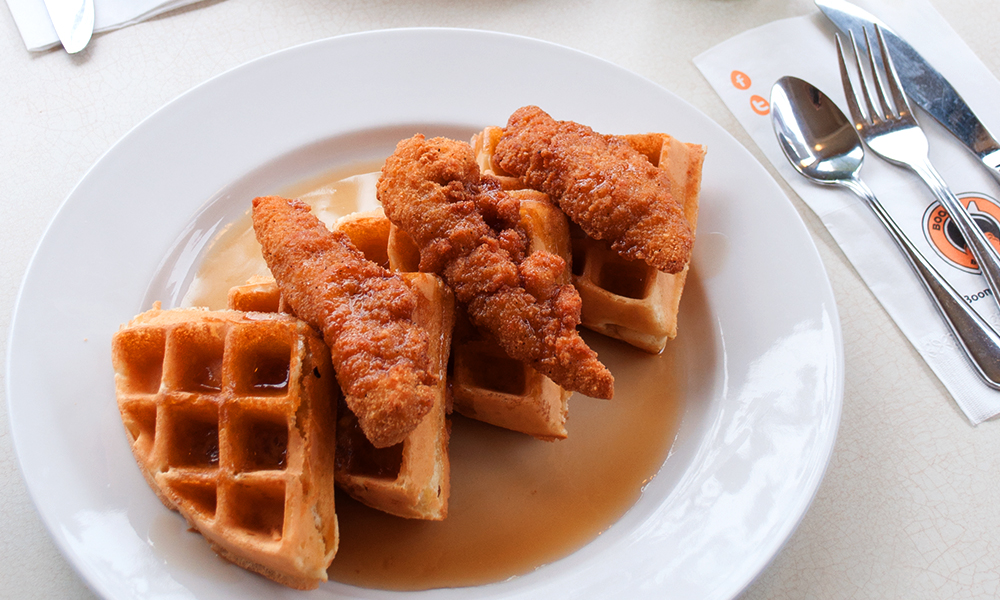 They say opposites attract, and we absolutely agree. Because no two things could be further apart than chicken and waffles. Where one is savory, the other is sweet. Where one is fluffy, the other is crispy. It’s like yin and yang, coming together to make…you know, that yin and yang symbol you see everywhere. So yea, basically they taste great together. But the question is, who came up with the crazy idea of putting them together in the first place?

To explore the history of this dish, we need to go back to the origins of both chicken and waffles.

First we tackle the crispy, juicy and delicious fried chicken. Fried chicken shows up in its earliest form as a fricassee—fried chicken pieces braised in sauce. Fricassee was popular in the Mediterranean basin during the medieval period.  By the 1300’s, friquasée, a combination of the French words for “fry” and “break,” began appearing in French culinary writings. By the 17th century, The Art of Cookery by Hannah Glasse, features a recipe for “Brown Fricasey,” a dish of chicken pieces coated first with egg, then spiced breadcrumbs, then fried in butter. Sounds familiar doesn’t it?  Once the chicken was done frying to a crispy brown, it was doused with a healthy serving of gravy, mushrooms and pickles. Glasse’s preparation went on to influence many other recipes, included the breaded and fried chicken we know and love today.

From the colonial period through the early 1800’s, African slaves were doing most of the cooking in Southern kitchens. At that time, chicken was considered a prestigious food within the African American community, and it was more expensive than some other meats. Enslaved cooks would make fricassee recipes from the popular cookbooks of the time period, In 1881, in her book What Mrs. Fisher Knows About Old Southern Cooking, African American cook Abby Fisher shared a recipe for fried chicken. Her version involves flour, fat, and a finishing of thin gravy. By then, most fried chicken recipes had moved beyond the fricassee, and did not require an extra braised in sauce at the end of cooking.

In comparison, waffles have a relatively simple timeline. Waffles appeared during the Middle Ages, when bakeries began making communion wafers to compete with monasteries. The waffle was created using the same method as communion wafers, by baking a thin cake between two metal plates. Waffles quickly became a popular street food, given they could easily be made with flour and water. The fancy ones added honey or eggs. Waffle irons were engraved with fun designs, from coats of arms to the plain honeycomb pattern we know and love today.

Thomas Jefferson reportedly started a mini American waffle craze during the 1790s when he returned from France with a goose-handled waffle iron. At the 1964 World’s Fair, Americans were introduced to the Belgian waffle, made fluffy with the help of yeast and egg whites. Once electric waffle irons replaced those inconvenient metal plates, waffles officially became an American favorite.

So that’s how waffles came about. Now for the fun part.

Wells Supper Club in Harlem, New York. AKA “Wells” opened in 1938. Wells became a late night hotspot for jazz musicians, who would stop by late at night after their gigs. The musicians, who came too late for dinner but too early for breakfast, enjoyed the delicious compromise of fried chicken and waffles. Before long, Wells was frequented by the likes of Sammy Davis Jr. and Nat King Cole (who held his wedding reception there). Since then, many restaurants have opened in New York, LA and other parts of the U.S. that exclusively serve chicken and waffles. It’s a comfort food favourite loved by its patrons.

For the holiday season we too have developed our own little twist on this soul-food favourite. We serve freshly baked waffles served with crispy breaded chicken tenders topped with maple butter sauce.

So, let’s raise our glasses to unlikely things coming together to bring good times into our lives. We hope you drop by for some chicken and waffles at Boom Breakfast, the best breakfast restaurant in Toronto to enjoy yin and yang food combos.