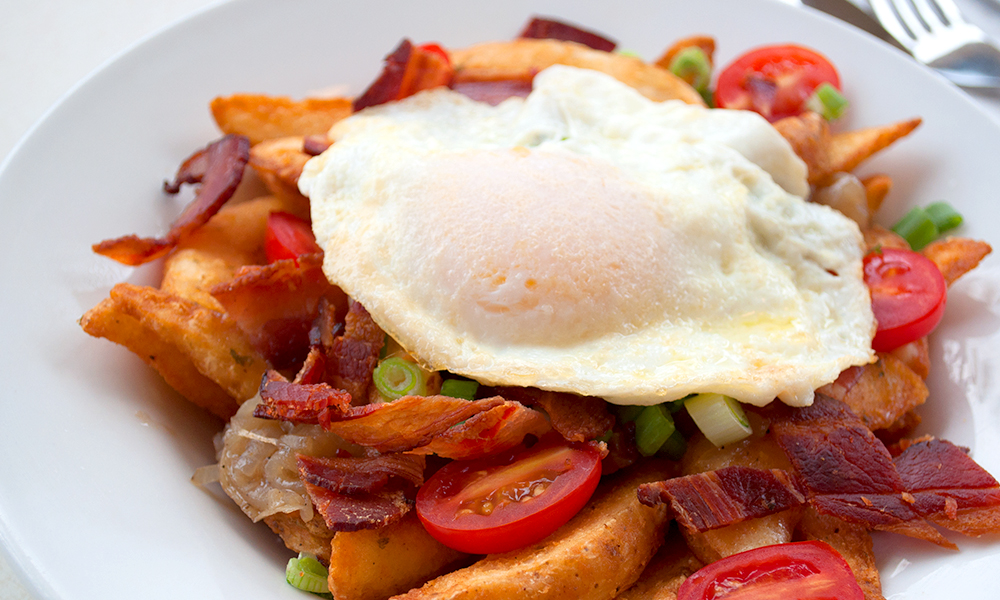 Canada’s 150th Birthday is this weekend and we are bursting with pride. There’s so much to be thankful for as Canadians, especially in the summer. We’ve got great weather, friendly folk and great eats from all around the world. And even though part of what makes us Canadian is our multiculturalism, we want to remind everyone that Canada has given birth to so much yumminess. So here’s a list of awesome Canadian dishes served at BOOM that you have to try!

We’re known all over the world for our poutines. The heavenly combination of fries, cheese curds and gravy has become the posterchild of our food scene. But where did the poutine come from? The story goes that poutine originated in the 1950s in Warwick, Quebec, at a restaurant called Le Lutin qui rit. When the owner was asked to add cheese curds to a customer’s fries,  Fernand Lachance responded, “Ça va faire une maudite poutine,” or, “That’s going to make a dreadful mess.” And thus was born the greatest invention of all time. We took poutines one step further by adding eggs and hollandaise sauce to the mix.  We call it Benny Poutine, and it’s delicious!

Our very own Toronto was the birthplace of peameal bacon. The name “peameal bacon” derives from rolling the cured and trimmed boneless pork loin in dried and ground yellow peas to make it last. Since the end of World War II it’s been rolled in ground yellow cornmeal, to create the tasty bacon you know and love today. We serve up our peameal bacon in a dish so Canadian, it’ll make you sing ‘Oh Canada,’ which is incidentally also the name of the dish. It involves two beautifully cooked eggs benedict preparations over peameal bacon. Yum!

It’s savoury, sweet, salty, sour and bitter all in one glass, the Caesar is one of Canada’s favourite cocktails since the 1970s. It was created by Walter Chell, restaurant manager of the Owl’s Nest bar in the Calgary Inn. It’s Made with vodka, Worcestershire sauce, hot pepper sauce, tomato-clam juice and garnished with a lime wedge and celery a stick, and can be found at Boom for your boozy enjoyment

Every province has its specialties. For the prairies, it’s the farmer’s sausage, made with wood smoked pork. When we combine this lean and well seasoned sausage with two XL eggs any style, you get the Sausage EH, a true Canadian Breakfast.

What’s more Canadian than maple syrup? Nothing! The maple leaf is on our flag for heaven’s sake. Did you know that maple syrup was originally tapped from maple tree barks by indigenous people to help cure venison? Yup it’s true.  French settlers learned the art from the original masters and started selling it as a product.  You can enjoy pure rich maple syrup with loads of dishes at BOOM, especially our pancake creations. Try lathering it over Banana Granola Pancakes, Wild Blueberry Pancakes, Banana Blueberry Pancakes and the classic Country style Pancakes.

So stop by this Canada Day and show us your Canada 150 pride. Order one of these dishes at BOOM Breakfast, the best breakfast restaurant in Toronto to try Canada’s finest food.