The Brief History of Breakfast 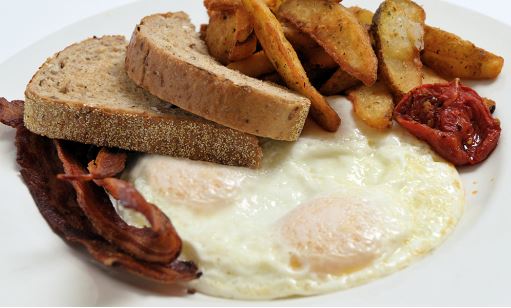 Seeing as we’re called ‘BOOM Breakfast’, we are naturally curious about all things related to breakfast. If fact, we’d even go so far as calling ourselves ‘Breakfast Geeks’. Thus our geekdom has carried us to explore our ancestry. We are compelled to dig deep into archives of the interwebs to give you a brief history of breakfast – the best meal of the day!

So let’s state the obvious first: Breakfast is the first meal taken after waking up from a night’s sleep, most often eaten in the early morning before starting the day’s work. The Old English word for dinner, disner, means to break a fast, and was the first meal eaten in the day until its meaning shifted in the mid-13th century. It was not until the 15th century that “breakfast” came into use in written English to describe a morning meal,[2]:6 which literally means to break the fasting period of the prior night; in old english the term was morgenmete meaning “morning meal.”

But really, eating breakfast began in the Neolithic (late Stone Age) era, when large stones were used to grind grains to make a sort of porridge. Now that’s what we call dedication. During the middle ages, barley and hops were used to make beer which was served up in the morning to hungry peasants alongside oat cakes or porridge. (So beer and breakfast do actually go together!)

Religious ritual also gave us the full English breakfast. On Collop Monday, the day before Shrove Tuesday, people had to use up meat before the start of Lent. A lot of that meat was pork and bacon as pigs were kept by many people. The meat was usually eaten with eggs, which also had to be used up, and the precursor of the full English breakfast was born. But at the time it probably wasn’t eaten in the morning.

In about the 17th Century, all social classes started eating breakfast as we know it, according to chef Clarissa Dickson Wright, a food historian. After the restoration of King Charles II of England, coffee, tea and dishes like scrambled eggs started to appear on the tables of the rich and famous.

More elaborate breakfast rooms started to appear on rich households during the 19th century. In the 1861 Book of Household Management, Isabella Beeton suggested a daily breakfast buffet included a cold joint of meat, game pies, broiled mackerel, sausages, bacon and eggs, muffins, toast, marmalade, butter, jam, coffee and tea. We particularly liked this part of history, as it made our mouths water. Anyway, towards the end of the 1800s, there was a backlash against these kinds of lavish diets. Groups like the 7th Day Adventists protested that meat-based breakfasts were leading to ill health!

Over the next few decades, people like John Kellogg, W.K. Kellogg, Henry Perky and C.W. Post developed ready to eat breakfast cereals that would go on to become the staple breakfast food. At the turn of the 20th century, other cereals, such as muesli were being invented in Europe. Breakfast cereals found success when rationing made bacon and eggs less accessible during the war. Also, as women started to work more, they no longer had the time to cook a full meal in the morning and cereals allowed children to prepare their own breakfast.

Now, however, despite the choices available, fewer and fewer people take the time to have breakfast.This is something we mourn because we know the importance of breakfast. A good morning meal helps you stay alert, energized and productive all day. Moral of the story? Don’t skip breakfast. Good Day! (CUE DRAMATIC EXIT)